On January 14, 2022, the Children’s Museum of Tacoma celebrated the ten-year anniversary of its move to 1501 Pacific Avenue. The Museum first opened up for play in 1985, with 2022 marking 37 years of service to the community.

Starting with local festivals, the Museum formed as part of a grassroots effort to provide indoor arts-based activities for families with young children in Tacoma. Presently, the Museum has expanded to a second location, the Children’s Museum at Joint Base Lewis-McChord (JBLM),  and implemented multiple outreach programs that serve children and youth of Pierce County.

The Children’s Museum of Tacoma is currently located in its third and largest home. Previously, the Museum was housed at 936 Broadway, its second home for 12 years. In 2012, the Museum relocated to the Tacoma Museum District — at the time, the district included the Tacoma Art Museum, Museum of Glass, and the Washington State History Museum.

The new location more than tripled the space for play to 10,000 square feet and more than doubled its attendance in the first year to over 115,000 visitors.

Since opening their doors, the Children’s Museum of Tacoma continued to grow its innovative learning programs, interactive museums, and inclusive community events. In many ways, the Museum became more than just a museum.

Follow the path of the Children’s Museum of Tacoma, as the organization transformed into Greentrike, with this timeline of meaningful milestones from the past decade.  Such spirited growth was only possible with gracious support and unwavering dedication from the friends of Greentrike.

Time flies when honoring children and youth, and championing play!

A New Home in the Museum District

The Museum relocated to the heart of downtown Tacoma on January 14, 2012. Museum space tripled and new imaginative playscapes made their debut.

Pay As You Will Admission Model

Symposium on Our Youngest Citizens

The Symposium was created to improve the alignment of Pierce County’s systems around supportive approaches for children and families. The Symposium is a semi-annual event that fosters cross-sector, community-wide conversations focusing on the community’s aspirations for young people and building a child- and youth-centered community.

In partnership with UW Tacoma, the Muse opened as a Reggio-inspired, fully licensed, full time childcare center. In 2020, the Muse closed due to impacts from the Covid-19 pandemic. The Muse served over 200 families over its four years of operation.

More than a Museum Campaign

The More than a Museum Campaign raised $8.4M. The campaign supports organizational capacity growth and an expansion of child and youth services across Pierce County.

Greentrike created the Cares Kits to address the needs of the children at Mary Bridge Children’s Hospital who benefit from thoughtful, play-based activities to help them process their journey. The Cares kits offer a creative way for children to process big emotions while infusing fun and joy.

Scooter Grants are funded through donations from the community and are dedicated to child-centered community projects. The grants are awarded during the Symposium to power creative ideas that lift the voices of children in Pierce County. More than $20,000 have been awarded since the grant program began.

Children’s Museum of Tacoma becomes Greentrike in recognition that the organization has grown to become more than a museum. The evolution of the Museum into Greentrike was natural considering that many of its community programs, services, and initiatives were outside of the scope of a traditional museum.

Greentrike was selected to serve as the Out-of-School Time Intermediary for Pierce County. Partnering with Tacoma Public School District (TPS) and Metro Parks, Greentrike launched at 35 school sites across Tacoma.

Greentrike opens services for University Place School District (UPSD) following the successful launch in TPS. ELO programming for UPSD opened as a pilot program that provided sessions to four sites across the district.

Greentrike opened its second location and the first children’s museum on a military installation. Children’s Museum at JBLM provides high-quality, playful environments, and builds community for military families on JBLM.

Play to Learn goes virtual to continue to serve children during the COVID-19 pandemic. Play to learn is a program for children and adults to play together and is provided across multiple locations across Pierce County.

Greentrike was honored to be a thought leader alongside other partners in  their community to lift up Emergency Day Camps for children as young as 3 years old, ensuring that our first responders, healthcare professionals, and other essential workers could fulfill their important contributions during the first year of the COVID-19 pandemic.

Supporting Greentrike’s youngest preschool friends, the camps centered on creating a safe-space, caring environment that invited children to creatively connect with themselves and others through play; something always at the heart of the Greentrike’s mission, made all the more profound during a global pandemic.

Preschool Powered by Play launched in the downtown flagship location in 2012, with an expansion to the Hoyt Early Learning Center in the Proctor District in 2016.  This expansion included toddler classes, and since its creation, preschool has served 499 families. 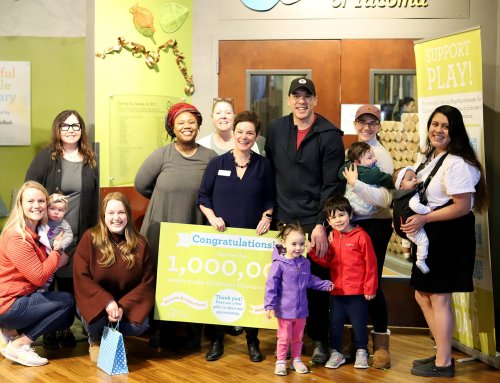 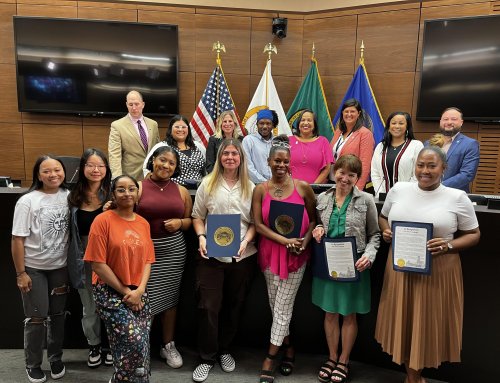